Bitcoin Cons: Some Faults with the king 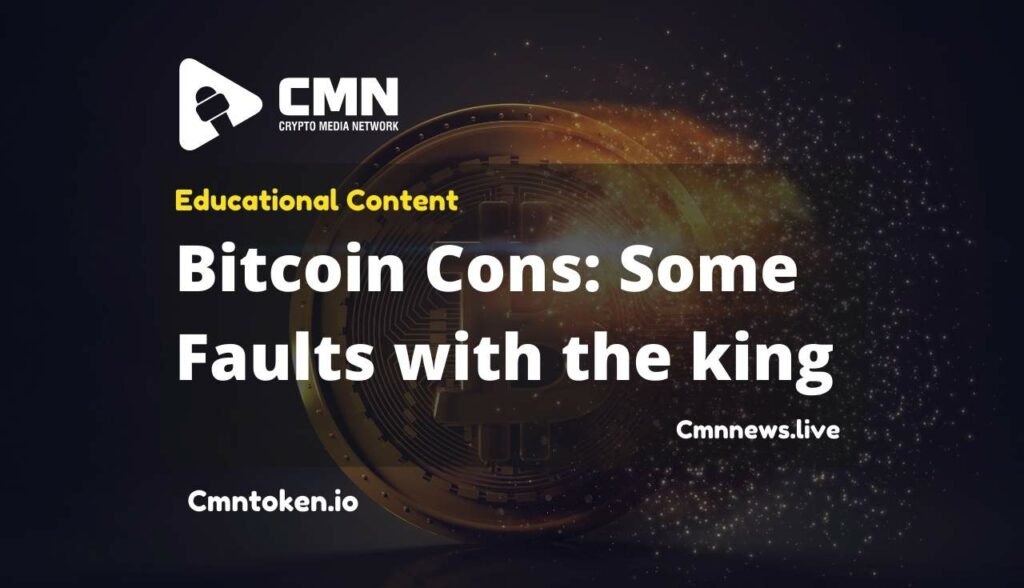 Bitcoin Cons : Some Faults with the king

Bitcoin cons
Bitcoin is called the king of Cryptocurrencies. Today’s Bitcoin price is $56,414.07 USD, with a 24-hour trading volume of $38,724,917,323 USD. This is our current Bitcoin to USD exchange rate. Bitcoin gained 2.46% in the last 24 hours. It has a market cap of $1 Trillion+ USD, a circulating supply of 18,840,681 BTC coins, and a maximum supply of 21 million. This article is constructive criticism of Bitcoin and points out the faults so that we can evolve.

Also Read: Stacks Grow up 57% After Bitcoin NFTs Take Off

Great Inefficiency: PoW is inherently extremely inefficient. Energy required to mine a single Bitcoin in 2021 is roughly the same as that consumed by a typical US family of four in 5 years. Every node involved in the transaction must perform computations and store information redundantly. As opposed to BFT-Paxos, RBFT, and SBFT used by Hyperledger Fabric, other Byzantine Fault Tolerant distributed consensus methods are 107 x more efficient for energy use and 104 x for storage.

Node Centralization: As it becomes more difficult to run a full node, blockchains become more centralized. The decentralized nature of the network decreases as storage sizes increase and fewer people are able to run nodes. In the past several years, Bitcoin’s number of full nodes hasn’t increased. With the size of the blockchain increasing, Bitcoin nodes can take weeks to sync. Mining pools make decisions and individual miners don’t have any financial incentive to verify the decisions.

Don’t use generic hardware like CPUs and GPUs as the mining hardware. Mining isn’t something the average person can do. If you want to increase your profitability when solving SHA-256 puzzles, you’ll need to join a mining pool that uses high-end ASICs.

Lack of Finality: Transactions are recorded in 10 minutes, and probabilistic-finalization takes up to 60 minutes. Even with 30% of hash power from the largest mining pools, finality is only 74% likely after 6 recordable blocks.

Risk of attacks: Blockchains attacks by built-in by design: 51% attack, DoS attack, withholding attack, bribe/game-theory risks. Additionally, there are additional attacks via 3rd parties: exchange hacks, wallet hacks, coding glitches, fraud, and side chains. There is a possibility that 2 of these pools can collude or be bribed by a nation state to get a majority of network hash power, but currently no pool owns more than 30% of the network hash power. Mining pools and individual miners are not financially rewarded for running full nodes and verifying the decisions of their operators.

Lack of privacy: All transaction history is public. The public blockchain consists of simple pseudonymous blocks, but you are able to figure out your identity through a tool such as Transaction Graph Analysis. By tracing your transactions on the blockchain, people can also estimate your wealth. An error can cause all your transactions to be linked. A token alone is also nonfungible because of these reasons.

No protection/customer support: There are few legal protections against corruption, fraud, bugs, and accidentally losing your wallet. You can’t count on a customer support team to step up when something unexpected happens.

A slow evolution: Bitcoin evolves slowly due to the need for social consensus and the complexity of Blockchain technology. It takes time for hard forks to be completed. Hard forks are avoided by the Bitcoin Core foundation.
This is not necessarily a bad thing, but it does mean that most developments to Bitcoin turn into separate coins, rather than evolving along the canonical chain. Updating Bitcoin often takes months of discussion and years of development. Enterprise distributed ledgers, on the other hand, can update daily without blockchain bureaucracy.

Layer 2 issues: Most Layer 2 solutions (e.g. fewer validation nodes) are centralized or have little decentralization. This increases the risk of side-chain attacks.

Increased transaction costs: As halvings continue, block rewards will keep decreasing. There will either be an ice age in which all miners withdraw except for those who can acquire the cheapest ASIC mining rigs and the lowest electricity prices, or Bitcoin transaction costs will rise to cover the block reward costs.

Store of Value: It is too volatile to be considered a stable store of value, losing up to 80% of its value after crashes. It is a more speculative investment than gold or silver.

Corporate/practical use aversion to Bitcoin: Bitcoin doesn’t support smart contracts and only supports a very basic Bitcoin Script. While corporations and institutions investigate blockchains, they are generally wary of anything they do not control. As of today, the majority of Blockchain business applications exist in a permissioned ledger. Examples include Hyperledger Fiber and ConsenSys CodeFi.